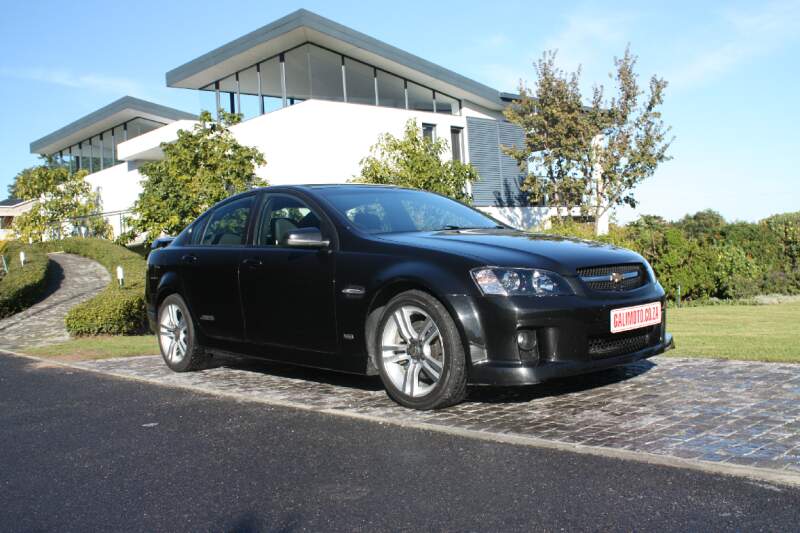 Certain cars raise the eyelids and saliva levels of petrol heads and guarantee their owners, even temporary ones, a crowd of inquisitive onlookers. The escalating-pitch one-word “And?” is a favourite question you’ll have to endure when you hold the key to a Chevrolet Lumina SS.

Be sure to commit at least the technical specifications of the vehicle to memory, make some crib notes, or simply print a brochure off the internet for the inevitable and inexhaustible Q&A’s. Other tests of character include mumbling passers-by with pointy fingers, edgy hatchbacks at traffic lights and relinquishing possession of the key.

Nobody buys a Chevy Lumina SS for its practicality, although it does possess a fair chunk of it. Nor would you clutch on to your wife’s leg and plead that it has great interior space; which it does. Bokkie already knows why you want to trade the double-cab for an SS. Speed.

Ha-ah, she says. Why has it got, like, ten exhaust pipes and an annoyingly reflective ironing board on the tinny boot lid? Employing your best distraction tactics, you hastily point out the unbelievable spaciousness of the cabin. Rear leg-room is right up there in S-Class and 7-Series territory, but at less than half the price!

No go. Your better half declares the Lumina’s shape as too butch and bulky. It has too many spoilers and skirting boards, none of which will clear a standard-sized pavement. You know she’s right but keep on nagging, hoping she will eventually see the sense in purchasing a Lumina SS.

The standard 5 year 120 000km warranty and roadside assistance briefly light up her eyes, as does the 3 year 60 000km service plan and 5 year unlimited kilometer anti-corrosion warranty. Yet deep down inside you know you’re fighting a losing battle, trying to pass a wolf as a sheep.

Uh-oh. You might’ve just overdone it and given your game away. “Nee, nee, nee. Why has it got three brakes?” Umm, for extra safety. “What does this car cost?” Precisely N$423 650, you answer.

Ahh, but for that amount you should rather be looking at the Chrysler Voyager, VW Kombi, Dodge Journey, KIA Sorento or that oulike Mazda CX-7, your wife alleges. Most have more seats, newer features and less look-at-me body kits.

This isn’t looking good, as you realise that the Chevy Lumina SS’ raison d’être is its humungous muscle-car engine. 5,976 cubic centimeters of lazy American 16-valve vee-eight produce grunt to the tune of 270kW (367hp) or a rubber-shredding 530Nm.

You quote the SS range of about 565km, withholding information like its claimed average consumption of 12.9L/100km from a reasonably big 73L tank. None of which you will achieve. Ever. In daily traffic you’ll struggle to attain 15L/100km and struggle even more to keep your foot upright.

But Liefie isn’t buying your bluff and noticed the fat leather steering wheel, sports seats with SS badges and the big red instruments displaying “SS”, “V8” and a 280km/h speedometer. “What! How fast is this car?” Dayum, busted.

Chevrolet withholds most performance figures (probably to aid desperate husbands) but our GPS clocked a 0-100km/h time of 5.2 seconds at sea level. Your top speed guess is as good as mine, but I can report that the V8 has relentless pace and seemingly endless power reserves.

It cruises quietly (and quite comfortably) at low or high speeds and has decent grip levels… until you trap die petrol. The 6-speed auto-box is a bit lethargic but the V8 is far from it, eventually howling a scary melody from under the bonnet when you poke it with a stick.

Thus I’d recommend the manual version and a less restricted exhaust; something all my fellow SS devotees agreed on. Furthermore, in order to preserve the rear tyres and your sanity/marriage/pride/life, keep the traction control on and do not floor it on wet, sandy, uneven, damp, greasy, banked or curved roads.

The Chevrolet Lumina SS is one of those cars which make you tingle even before you get in. It goes the way it looks, messes with your adrenaline glands and rewards the skilled driver with laugh-out-loud experiences. If only your wife would understand…